I truly love to weave.

The raising of the shed, the throwing of the shuttle, the beating of the weft are all part of a symphony of action and sound that make a happy place for my otherwise crazy brain.

But getting to that place can push the limits of patience.

The fine thread used in making the Edward Bransfield Commemorative tartan can twist and turn. It can play general havoc with the effort to put each thread in the right order onto a loom that is 7 feet (or thereabouts) long and 5+ feet wide.

Sometimes, those threads go to the loom willingly. Wound onto the back beam, weights and tension do not seem to bother them. Drawn through the heddle one by one, pulled through the reed in pairs or triples, the order remains without complaint. As a result, the color pattern remains straight and true. Weaving can commence quickly with such compliant threads.

Then there is the real sneaky thread, that one little pesky thread that decides to mess it all up. The very dark colors like to do this. They cross where they shouldn’t. Living in a heddle meant for another thread is a favorite tactic. But the most diabolical sneak is landing in a part of the reed meant for another thread. Usually that is close to where they are suppose to be.

When threads cross, the weaving pattern can’t be achieved. It clogs up the mechanism that raises or lowers the threads. It causes the wayward thread to never be held in place by the weft. This is very distressing to the weaver as the time must be spent to hunt down the miscreant and correct its ways.

The investigation of crossed threads can be quick. That is assuming you have a thread that is not very smart at being out of place.

The smart, conniving thread takes up much more of the weaver’s time. One pesky little thread delayed the start of the actual weaving of the next set of cotton Edward Bransfield Commemorative Tartan scarves for an entire day.

One pesky little thread is now in its proper place.

One pesky little thread is ready to be a part of something bigger.

One pesky little thread will be part of an Edward Bransfield Commemorative Tartan scarf tomorrow.

(P.S. The language used during the above described investigation required other humans, canines and felines to exit the premises.)

What Our Customers Say 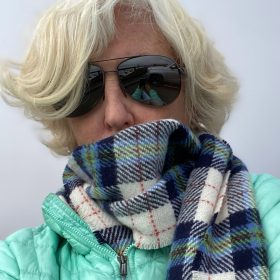 I love Gael Gisvold’s new tartan for many reasons. Celebrating Edward Bransfield’s discovery of Antarctica with the shades of the Antarctica land and seascape is such a cool idea. The colors are beautifully woven in to a fascinating story of this icy, harsh environment. My scarf is soft and warm. The colors match most everything that I own. Being Scotch Irish myself, I appreciate the interesting histories that so many tartans can tell.

Join our email list for the latest blogs, new products and special offers.