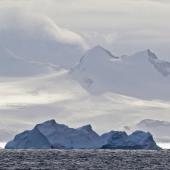 Born in Ballinacurra, County Cork, Ireland around 1785, Edward Bransfield was the son of a fisherman. On June 2, 1803, when he was 18 years old, British sailors “removed” him from his father’s fishing boat. He was impressed into the Royal Navy. He remained with the Royal Navy and rose in rank quickly. He eventually became known as a Polar explorer.

It 1819 Bransfield was sent to explore the newly discovered Shetland Islands. During that exploration, on January 30, 1820, he sighted and charted the Antarctic Peninsula and what is now known at Mount Bransfield. The first to do so.

He died in obscurity; His journals had been lost and his discovery remained in controversy until the journal of a midshipman on that voyage was discovered in New Zealand.

His life and his discovery are being honored with a monument in Ballinacurra, County Cork, Ireland.